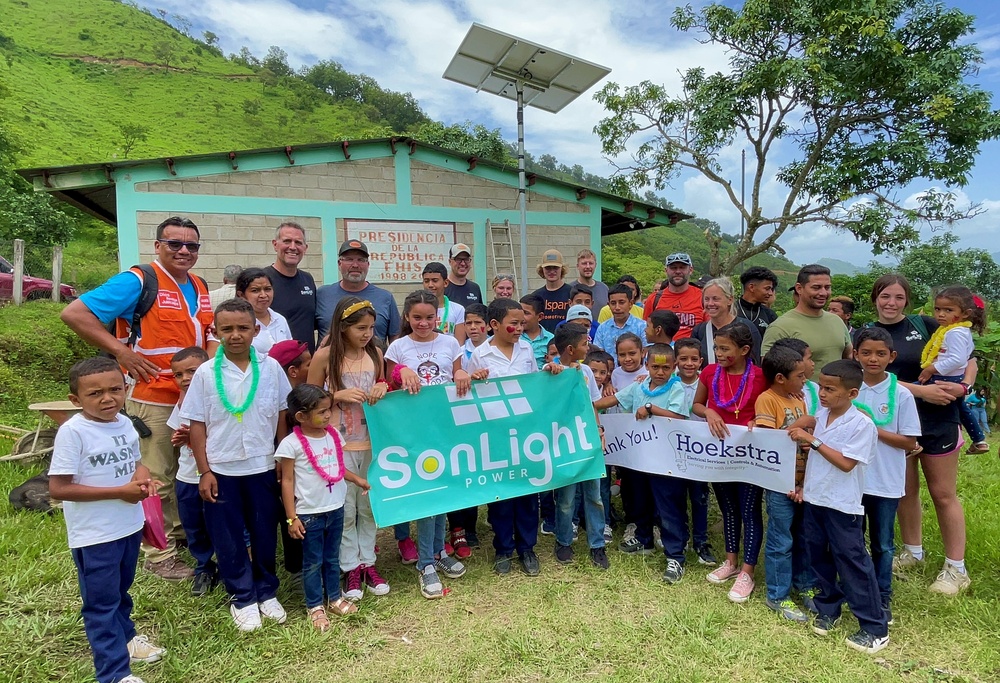 “To hear from the teacher that they’d been praying for electricity for 10 years. They never gave up hope. God paved the path for us to be there.”
–Paul Hoekstra, President of Hoekstra Electrical Services

We all know what it’s like to wait. To long for, to pray for something.
Imagine praying for something for 10 years and being able to experience that prayer answered. Now imagine being part of the team that plays a role in that answered prayer. That’s exactly what happened on a recent SonLight Power mission trip to Honduras.

In August, a group of employees and family members from Hoekstra Electrical Services, located in Holland, Michigan, joined SonLight Power in solar missions work to install pole-mounted solar power systems at three rural schools in the Honduran mountains of Olancho.
At one school in particular, Jose Cecilio del Valle, located in the village of La Yuca near Juticalpa, Olancho, the director expressed the decade-long prayer for electricity to be made available at her school.

“The most meaningful thing to me was at our third school, Jose Cecilio del Valle,” says Paul Hoekstra, president and namesake of Hoekstra Electrical Services. “To hear from the teacher that they’d been praying for electricity for 10 years. They never gave up hope. God paved the path for us to be there.”

Paul couldn’t say enough about the warm welcome the team received at each school and the engagement of the community in helping the team install the solar power systems. And to think such an effective partnership between Hoekstra and SonLight Power began with a simple Google search: Solar. Electrical. Missions.

“A couple of years ago we thought it would be a good idea to not only charitably give money to organizations, but also find some organizations where our team can engage and do some service-type projects,” Paul says.

He spent a year planning with the SonLight Power team, including Kevin Sasson, SonLight Power executive director. They dreamed of what it would look like for the two organizations to partner together. They wanted to be sure each organization’s core values aligned with the other.

The big question for Hoekstra Electrical Services was, “How can we marry our God-given gifts and talents of being electricians to serving?” Paul recalls.
After making a trip to Cincinnati to attend SonLight Power’s Solar School, Paul and the rest of the Hoekstra team felt fully equipped and prepared to do the work in Honduras.

“Kevin, Clay Luna, SonLight Power’s director of programs, and the rest of the SonLight Power team did a great job in preparing the Hoekstra team for our time in Honduras,” he says.

Next Steps on the Journey

Once in Honduras, the team took day trips out to the different schools to install the solar system arrays, inverters and lithium batteries. They also wired the schools and installed 20 to 30 lights in each facility along with a handful of receptacles.

“The community involvement and engagement in the project with us was amazing,” Paul says, “which is awesome to see as far as the sustainability piece, too. After we leave, there is some ownership of it.”

The group also led vacation Bible school-style activities at the schools. While half of the team was installing a solar power system, the other half engaged with the kids. The number of children at each of the three schools ranges from 40 to 56.
“At the end of the day, to have all the kids and both teams come together to have a lighting ceremony where we can tie the Biblical message of Jesus being the light of the world to turning on the electricity in this building, in a community that hasn’t been able to have electricity and tying the two together was pretty cool,” Paul says.

It’s this combination of S-O-N and S-U-N that sold Steve and Missy Bayn of Holland, Michigan. Steve Bayn is a controls engineer for Hoekstra. His wife, Missy, is a kindergarten teacher who has worked in education for the past 19 years.
“Putting solar power into communities and schools where there wasn’t any electricity, I thought that was great for Steve,” Missy says. “We also would be working with the children in the schools to do a kind of vacation Bible school. So that’s both Steve’s skill set and my skill set.”

“It’s the adventure of going somewhere, being in a different culture, then taking those skills and talents and putting those to use for God’s glory.”
–Paul Hoekstra

The school the team partnered with on the third day of installation, Jose Cecilio del Valle, also made an impression on the Bayns.

“The last school we went to was a bit smaller so the electricians were able to finish their side of the work pretty quickly and we were able to bond with all of the kids and families,” Missy says. “They were really welcoming. They had signs and balloons and they kind of made an aisle for us to walk through when we got there. Pulling up to that last school is ingrained in my brain.”

When asked about joining SonLight Power on a future mission trip, the Bayns are all in, but would like more people to experience this kind of work firsthand.
“We’re going to have a quarterly meeting, and I’m definitely going to push everyone; if they have any inhibitions about doing something like this, they should just do it,” Steve says. “The SonLight team is amazing. Their Honduran team is amazing. We have great connections there with all those people. I’d love to see them again.”

According to Missy, the group was told that there are currently 3,500 schools in Honduras without electricity, which highlights the need for more partnerships like the one between SonLight Power and Hoekstra. Paul says Hoekstra Electrical Services is definitely working on some details for another mission trip, potentially as soon as next year.

“The motivation to go back and serve on another trip was not only the preparation and the professionalism of the SonLight team, but it’s just such a good relationship between our technical skills and what we enjoy doing,” Paul says. “It’s the adventure of going somewhere, being in a different culture, then taking those skills and talents and putting those to use for God’s glory.”
Not only is this partnership in solar missions a perfect marriage of talent and abilities, but it is also an opportunity for employee engagement and team bonding.

“I think it was a great opportunity for us as a team from Hoekstra Electric to spend some time together and get to know each other,” Paul says. “This trip is perfect for that. You’re spending a whole week together and traveling together and serving. There’s so much good that comes out of a trip like this. Not only being good stewards of our time and talents of what God’s given us, but also getting to know people and getting to know our team better too. It was invaluable.”

Inspiring Change, Near and Far

It’s also about perspective. A trip like this creates humility, compassion and understanding.
“We’re just so blessed here with what we have,” Steve says. “But also, here in Holland and Zeeland [the neighboring town], there’s a large Hispanic community. I must admit, I’ve always had the mindset of, if you’re here you should just learn the language and blend in. Being in Honduras and not being able to speak the language, I get it. It’s tough. I’m using DuoLingo now, trying to learn Spanish because if I go back, I want to be able to communicate.”

Not only that, Steve’s desire to learn Spanish, inspired by his time in Honduras, will also help him make a difference at home in his own community. “To be able to help someone here in Holland and Zeeland…if they can’t communicate because of the language barrier, I’d love to be able to step in and help them out,” Steve says.

From solar, electrical and missions to perspective, transformation and lasting impact. Ultimately, a partnership between SonLight Power, Hoekstra and the people of Honduras is working together to bring about lasting light and hope.

“Driving up to these schools, thinking that these kids and teachers have never had an opportunity to teach with electricity,” Paul says, “it’s pretty powerful. No pun intended, I guess.”

Find out how your organization can partner with SonLight Power on purpose-driven, team-building trips that generate lasting impact. Connect with them at Info@SonLightPower.org.